I’m happy to announce that as of November 1st I am Narrative Designer and Lead Writer for Day 1 Studios, LLC in Chicago. It’s been a rapid process from application to the negotiation table and it feels good to be part of such a talented independent studio. This is the first such position for Day 1, having worked in the past with contract writers and/or publishers to deal with most of the storytelling, and I’m glad to say everyone I work with seems very happy to finally have a FT storyteller in-house. Everyone at Day 1 understands the narrative needs of modern interactive entertainment, and I’m happy to fill that gap.

The studio’s most recent title, published by Lucas Arts, Fracture, has had mixed reviews with a current metacritic score of 64, but overall has come out strong (85 being the highest rating) for it’s terrain modification tech, which allows the player to modify the terrain for tactical purposes. The studio has received acclaim in the past for it’s titles Mechassault, Mechassault 2 and the port of F.E.A.R. which is to see a continution in the franchise this year with F.E.A.R. 2: Project Origin by Monolith and Warner Brothers Games.

As a bit of a side-note the studio is run by the talented team from FASA Interactive. They created the Battetech transmedia franchise in 1984 which I enjoyed very much as a teenager. My favorite manifestation of which was the location based-entertainment (LBE) at North Pier and the Real-time Tacitcal game (RTT) known as Mechcommander.  These great games allowed the player to step into the the cockpit of their favorite mech and do battle in real-time with other players.

The pressure is on and as a department of one my job is to insure that the narrative experience in our products is compelling and in-sync with the studio’s vision of the games in development. As a “two game” studio dealing in AAA-game development I have my hands full trying to catch up with all the work going on at the studios 2 locations (Hunt Valley and Chicago) and 130+ employees. After working with THQ on PC titles its good to cross back into the world of cross-platform development. 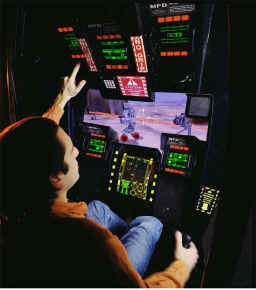 Being that I am a Midwesterner, and native Chicagoan, it feels great to get involved in entertainment production outside the west coast, where I’ve spent the better part of the last 5 years. Chicago has been a hot bed of development as of late with new studios popping up after the dissolving of EA Chicago; Midway games also continues to be a great source of talent for the city.

I’ll be sure to keep NDE readers informed as developments in our products are made public. Thanks to the Day 1 team, particularly Denny Thorley and TJ Wagner, for believing in the future of Narrative Design as an integral part of next-generation video game development and for placing me in the cockpit as I prepare to co-author a new landscape in the possibilities of videogame storytelling.

Listed below are links to blogs that reference this entry: My new shoes – Narrative Designer/Lead Writer at Day 1 Studios.

TrackBack URL for this entry: http://regionvuz.ru/cgi-sys/cgiwrap/dinehart/managed-mt/mt-tb.cgi/52

Game Writers in the Trenches™ 3: Sande Chen was the previous entry in this blog.

Masters of Narrative Design™ 7: Flint Dille is the next entry in this blog.