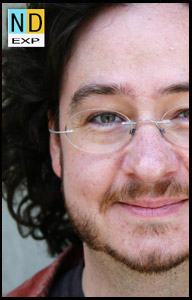 This is an ongoing NDE series featuring interviews with Game Writers in the Trenches™.  The game industry is riddled with the unsung heroes of interactive storytelling.  As game developers are increasingly looking to create meaningful virtual narrative experiences, listening to the real-world wisdom of these writers can help everyone on the development pipeline understand their trials, tribulations, and needs, in hopes of enabling them to do their job as they know best. Today’s game writer is Tom Abernathy, his journey as writer began in film, and now continues into video games. I’m hoping to see what we can learn from his experiences in the trenches of game development.

SED: You are currently a Writer at Microsoft Game Studios. Your career has had you focused full-time on storytelling in some of the worlds top-tier studios, what is the most challenging part of writing stories for games?

Tom Abernathy: Without  question, the interactive element.  Those of us who have worked as writers in other narrative media are trained and experienced (if we ARE trained and experienced) in linear narrative.  The spin that interactivity – which is to say, non-linearity – puts on things can really mess with your head.  There are so many tools we’re used to having at our disposal – timing, sequence, parceling out information in a certain way, dramatic irony, on and on and on – that increasingly fly out the window the more control over the direction of things you give to the player.  We writers are used to driving the experience, and then in games, suddenly we’re not.  That’s a tough transition to make, and, after ten years in this industry, I’m still making it.

That being said, the challenge it presents is incredibly rewarding; you’re forced to take out and reexamine all your habitual ways of doing things and to ask yourself WHY you’ve done them that way and, now that you can’t, how else you can do them and still get the kind of effect on the player that you want.  Certainly, the more linear the narrative, the easier it is.  But I’ve really come to appreciate and embrace the challenge of giving some control over to the player.  It’s a Zen experience; it’s all about letting go. SED: Was there a realization at some point in your life that you wanted to write specifically for games?

TA: I think so, yeah.  Not in the sense of an apple-on-the-head moment, but I remember quite clearly when I was in film school at USC getting my MFA in ’95 or ’96, being in my apartment and looking to video games to give me a break from the grind of that program, firing up the PS1 and playing the stuff that was out that had any pretension to narrative, and just wanting to hurl the controller at the TV set.  The kindest thing I can say about most of those games was that the writing seemed to have been done by a well-meaning amateur with some innate ability but no craft, no sense of what separates good writing from bad or good storytelling from mediocre storytelling or flat, boring characters from characters that pop off the screen and get you interested.  (Never having been a big PC gamer, I wasn’t aware at the time that, even then, there were some PC games that aspired to more, writing-wise, and even a few that achieved more.  But even if it had, I think the contrast would have just made me angrier.)

And the thing was, given my varied background as an actor, a theatre director, a filmmaker and a screenwriter, I just KNEW I could do better.  I didn’t know how well I could do, but I knew I could do better than what I was seeing, just by bringing some of my skills gained in other media to games.  (One thing I think helped was that, with such a varied background, I was already used to approaching a new medium and figuring out how I could take what I had learned in another and bring it to bear; I’d had to do that several times already.)  So I went on a crusade to find someone in the games industry who would give me a chance to do that.

This is a new NDE series featuring interviews with Game Writers in the Trenches™.  The game industry is riddled with the unsung heroes of interactive storytelling.  As game developers are increasingly looking to create meaningful virtual narrative experiences, listening to the real-world wisdom of these writers can help everyone on the development pipeline understand their trials, tribulations, and needs, in hopes of enabling them to do their job as they know best. Today’s game writer is Haris Orkin.  His experience as writer runs the gamut of media types, with a most recent focus on games.  I’m hoping to see what we can learn from his knowledge and experience.

Stephen Erin Dinehart:  Haris thanks for taking the time to interview with the NDE. Your most recent project was Command and Conquer: Red Alert 3, can you explain your role and duties?

Haris Orkin: I was hired to work with the team on the story for the game and write the script for the live action cinematics.   The story was collaboration between Mical Pedriana, who functioned as the narrative designer, Jason Torres, the lead game designer, Mike Verdu, head of EALA, and me.   We wanted the tone and the concept to be a continuation of Red Alert 2, which came out about seven years ago.  Mical was the audio lead on RA2 and wrote all the unit responses. I was a big fan of that game and the Command and Conquer series in general.  So I knew the tone and the story and the characters and was thrilled to be included.   A bare bones outline of the basic story was already in place by the time I was brought on board.   But I suggested some changes, fleshed out the existing characters, came up with some new ones, and created the relationships and conflicts and many of the specifics.   I also wrote and/or rewrote what we call the “Talking Heads”; live action head shots of various characters that appear in game that help steer the player in the right direction vis-à-vis game play.  I helped Mical on unit responses and co-op commander responses and barks as well.

SED: Is that a full-time or contract position?

SED: Was there a significant change in the format of your solely the cinematics versus writing for an entire game as you did on Call of Juarez?

HO: I wrote the cinematics for RA3 with Final Draft, a screenplay program.    But all the unit responses and barks were written in Excel.   COJ was written entirely in Excel.   While RA3 has clearly delineated cut scenes (and the talking heads), COJ has fewer cut scenes and more scripted events, so you’re still within the game world.  (Much like Half Life 2.)  All the cut scenes used in COJ used Techland’s proprietary graphic engine, so it was easier to keep a feeling of seamlessness between the game play and the story.  We also told a lot of the story with artwork and audio monologues while the levels were loading.   RA3 uses the same story-telling mechanic that Command and Conquer series has always used.  I think it still works for an RTS game, since we’re cutting from live action scenes to a top down RTS view.   To cut from a live action scene with real actors to a first person view with CGI characters could be pretty jarring and possibly pull you out of the narrative.  RA3 does use CGI cut-scenes that show off the units and big story moments and I contributed ideas for those as well.

This page is a archive of articles in the Game Writers in the Trenches™ category from September 2008.

Game Writers in the Trenches™: November 2008 is the next archive.