RTS is a very different beast from the 1st-person, or singular 3rd-person perspectives of most other genres. How do you tell a story that encompasses many perspectives into a cohesive whole? It has been answered in part, by the history of RTS story-telling mechanics and its evolution. But there is much more work to do.

The Westwood RTS game “Dune II: The Battle for Arrakis” used simple stills, animation, and text. Some how I believed I was playing the Harkonin, harvesting spice felt good, everything was fun, battling for resources, killing sandworms, and conquering you’re enemy. I felt like Conan, “To crush your enemies, to see them driven before you, and to hear the lamentations of their women.” This was fun!

The entire gaming experience not only has become more vivid since then, the devices are more refined, and the craft unto itself has evolved; all lending to better experiences for the player. RTS of yesteryear and today still share one thing in common with most none video games, the combination of linear Cinematic sequences and non-linear Gameplay, that when combined create a cohesive experience for the player.

Database narrative refers to narratives whose structure exposes the dual processes of selection and combination that lie at the heart of all stories, particular data – characters, images, sounds, events – are selected from a series of databases or paradigms, which are then combined by the player, through action and thought, to generate specific stories. 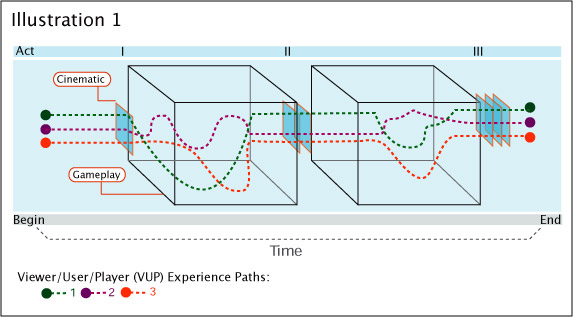 In the interactive system of an RTS; a player encounters 2 primary types of narrative spaces:

The Cinematics acts as choke points, that is, all players must pass through it in order to advance. During a cinematic sequence, the Data (as presented) is fixed, that is, if the total sum of cinematic content within an RTS were to play out in succession the narrative would be rendered linear, and non-interactive, becoming then some form of machinima.

Dividing the Cinematic segments with interactive ‘sand-boxes’ allows the database of art, sound, and play, assets to be navigated and experienced via the player’s path choice. In this, the experience of database navigation will vary from player to player, and experience to experience, both in the Cinematics and the Gameplay.

If the game allows the player to interject their own story without heavy handed authoritarian dictation, a much more rich experience will be had. As any good filmmaker would tell you, some of the best devices are empty mysteries, filled in endlessly by the subjective mind of the viewer. The system relies on a player’s own cognitive ability to create meaning and purpose within moments; each piece then wove together by the human mind in a consistent narrative. That is not to say this would be an easy task; but that if a well crafted montage of Cinematics and Gameplay is presented, the mind lends itself to the creation of story. This is an act every living person can understand; our lives are in fact Database Narratives. These days we all watch a lot, be it on the TV or computer, or handheld device, and we spend our days moving in and out of moments with varying perceived limits to out agency. This symphony of seemingly random events is compiled together, in our minds, creating a linear experience by which we seek meaning and purpose.

Listed below are links to blogs that reference this entry: RTS as Database Narrative.

TrackBack URL for this entry: http://regionvuz.ru/cgi-sys/cgiwrap/dinehart/managed-mt/mt-tb.cgi/9

Bringing the RTS to Console: One Button to Rule them All was the previous entry in this blog.

Story Maps and the Sandbox is the next entry in this blog.