This is an ongoing NDE series featuring interviews with Game Writers in the Trenches™.  The game industry is riddled with the unsung heroes of interactive storytelling.  As game developers are increasingly looking to create meaningful virtual narrative experiences, listening to the real-world wisdom of these writers can help everyone on the development pipeline understand their trials, tribulations, and needs, in hopes of enabling them to do their job as they know best. Today’s game writer is Sande Chen, her experience spans from RPG’s to Serious Games. I’m hoping to see what we can learn from her experiences in the trenches of game development.

Stephen E. Dinehart: How did you become a game writer? 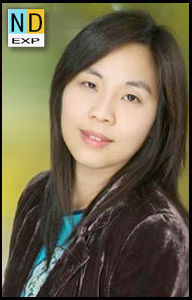 Sande Chen: Unlike other game writers, I don’t have a wild breaking-in story.  My professional writing career has only been in games.  Basically, I pursued academic majors that were relevant to game development.  Then, I applied for a job.

I was a double humanities major at M.I.T., which is known for its computer science and engineering programs.  After M.I.T., I attended the London School of Economics and USC’s School of Cinema-Television.  I specialized in screenwriting, but I wanted to learn more, so I asked production students to teach me what they knew and I took classes like Avant-Garde Cinema.  I started making music videos and while still in film school, I was nominated for a Grammy in music video direction. During a visit to M.I.T., I chanced upon a flier for a game design contest.  A military contractor was interested in expanding into entertainment.  With this first taste of game design, I started applying to game companies.

My first game writing credit is on Vicarious Visions’ space combat RPG, Terminus, which won two awards in the first Independent Games Festival at the GDC.  I have a very analytical side to me as well as a creative side and so, I think that game design successfully merges my strengths.

SED: Can you describe your work with Writers Cabal?

SC:
We write for games and we also do consulting on story or game design.
Each project is really different from the others.  It definitely makes
life interesting.  Anne and I have different writing backgrounds and
diverse experiences in the industry.  I’ve worked as a producer and I
find that’s really helpful in understanding how to mesh our work into a
company’s production process.  Meanwhile, Anne has worked as a Head
Writer in charge of a MMO writing team.  My background is more in
single-player RPG’s.

We’re mostly known for The Witcher, which
was our first joint project.  We were nominated for a 2007 Writers
Guild of America Award in videogame writing for The Witcher.  Our next
big game was the kids’ MMO, Wizard 101, which was released recently.

In
our consulting work, I find a lot of it comes from the serious games
sector.  In 2005, I co-authored a book with David Michael called
Serious Games: Games That Educate, Train, and Inform.  So, Writers
Cabal helps companies incorporate learning objectives into fun
gameplay.  We recently contributed a chapter on writing for serious
games to the upcoming IGDA Writers SIG book.

This page is a archive of articles in the Game Writers in the Trenches™ category from November 2008.

Game Writers in the Trenches™: September 2008 is the previous archive.