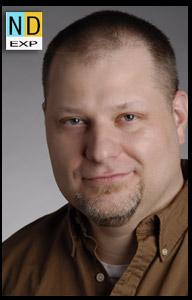 Entertainment is on the verge of something new; no not 3D, but a new generation of transmedia story experiences. Story worlds that, in a calculated fashion, cross from media to media providing players new ways to experience and immerse themselves in an authored interactive world. In the past this was done solely for purposes of merchandising and franchise expansion, but in the present it’s being used to create fantastic story experiences. This new NDE series Creators of Transmedia™ sets out to explore what visionaries in the field are now creating, and what they believe tomorrow will bring.

Today’s transmedia creator is Steve Danuser, Creative Director on the project code named “Copernicus” at independent developer 38 studios. According the company website “Steve is putting his talents for IP development, storytelling, game design, and community interaction to use on the company’s upcoming MMOG.” He joins us today to talk about his work and thoughts on the burgeoning craft of interactive narrative design for transmedia experiences.

Stephen Erin Dinehart: Steve thanks for taking the time to talk to the NDE, as newly appointed Creative Director of 38 Studios what does your role entail?

Steve Danuser: My job has two main areas of focus: overseeing development on our flagship IP and ensuring it is represented appropriately across all our products. The pillars of the IP are the MMOG and the RPG, but as we go forward my job will also involve other games and media. So my job is part game development, part storytelling, and part licensing overseer.

It’s an ideal situation for me because we have such a strong design department, led by Jason Roberts (Design Director) and Travis McGeathy (Lead Designer). With those two guys in charge, I know the gameplay is in perfect hands. I can focus totally on the story we’re trying to tell, enabling and encouraging our designers to build a memorable narrative experience.

This page is a archive of recent articles in the Creators of Transmedia Stories™ category.

Editorials is the next category.