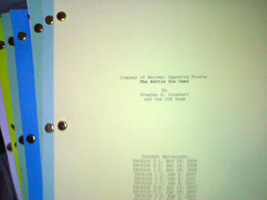 The play is a literary form that comes down to us from Ancient Greece intended for performance. Used as a production tool to create a perceived story space on stage, it consists of characters, dialog, action, and setting. It is a form that was adapted for motion pictures then called the “screenplay”. While not particularly different than its stage play ancestor, the screenplay is intended for use on linear theatrical productions such as film and television. I chose to adapt it to games for purposes of strengthening game story. While games have their design documentation, often a ‘bible’ of information or a presentation intended to communicate a cohesive vision, the screenplay acts as a method to create a common story vision among widely disparate development pipelines within game development, with the aim of creating a better user experience. While not a concept I claim to originate. It is a form that I have forged wholly on my own, with attention to what makes a game screenplay unique.

Linear cinematic segments, while potentially
altered by the player, or selected in a meaningful non-linear fashion
via gameplay, are no different than traditional screenplays. As the
first screenplays did not veer too far from stage plays, with minimal
sets, and high caliber, sometimes over-the-top, characters. So to the
game screenplay is still akin to the screenplays of film. Example 1
(below) is from my first game screenplay for “Company of Heroes:
Opposing Fronts”. 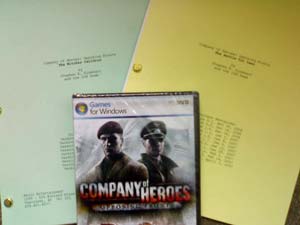 This is an overview of techniques I employed during the development of the award winning strategy game “Company of Heroes Opposing Fronts”. Publisher THQ’s first venture into narrative design, “Opposing Fronts” had to overcome interesting challenges and opportunities presented by storytelling in the Real Time Strategy game type and the COH franchise. This article will examine the writing techniques in the context of a mission based non-linear sandbox narrative bookended by a linear story. Writing for RTS tends
to be divided into system responses (MP) and storyline (SP). MP
speech consists of non-linear lines of speech which is associated with
structures and units. It is meant primarily for tactical communication
to the VUP, but
also as a means of creating narrative flavor. SP speech consists of all
campaign related speech, that is, linear scripted moments of dialog for
tutorial or story purposes.
Continue reading Writing for “Company of Heroes: Opposing Fronts”. This page is a archive of recent articles in the Narrative Design Tutorials category.

Products and Works is the next category.