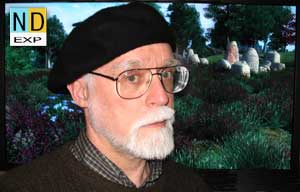 This is an ongoing NDE series featuring interviews with Masters of Narrative Design™.  While ‘narrative design’ is not a term in common usage, the design of story experiences is nothing new.  As game developers are increasingly looking to create meaningful virtual narrative experiences, looking at the lessons learned by these masters becomes increasingly valuable.  Today’s master is game author, developer and designer Ken Rolston.  As an early innovator in ‘pen-and-paper’ role-playing games he brings to video games a unique sensibility from 20+ years of experience in interactive narrative design. I’m hoping to see what we can learn from his wealth of knowledge and wisdom.

Stephen Erin Dinehart:  Ken thank you for taking the time to interview with the NDE.  You are currently Lead Designer on a computer role-playing game (CRPG) at the Toy Headquarters (THQ) studio Big Huge Games? SED: You have created both ‘pen-and-paper’ RPGs and CRPGs how are these experiences different for you?

KR: ‘Pen-and-paper’ RPGs can be authored by a single person [though they aren’t so much anymore], and produced and distributed using mature technology… paper printing and publishing.

CRPGs are far from a mature medium. You make everything up, nearly from scratch, each time.  CRPGs are also vast production challenges, involving many people, many disciplines, and huge budgets, and they represent far greater risks of time and capital.  And they are far harder to test and iterate rapidly.

I’ve also had the pleasure of watching people play my paper games like PARANOIA, and it’s like watching productions of a play you’ve written… exceedingly gratifying.

CRPGs are just way-too-much work, take way-too-long to produce, and cost way-too-much-money to produce as a medium of personal self-expression.  And they don’t evolve in the hands of your users as much as paper RPGs do.

But… I’ve recently been replaying OBLIVION, and it was pure delight.  So perhaps the gratification for the labor is somewhat delayed… but profound.

SED: Do you have a paper prototyping testing phase for your CRPG?

This page is a archive of articles in the Masters of Narrative Design™ category from September 2008.

Masters of Narrative Design™: August 2008 is the previous archive.

Masters of Narrative Design™: November 2008 is the next archive.