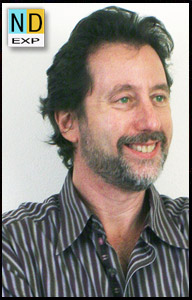 Entertainment is on the verge of something new; no not 3D, but a new generation of transmedia story experiences. Story worlds that, in a calculated fashion, cross from media to media providing players with new ways to experience, and immerse themselves in, an authored interactive world. In the past this was done solely for purposes of merchandising and franchise expansion, but in the present it’s being used to create fantastic story experiences. This new NDE series, Creators of Transmedia™, sets out to explore what visionaries in the field are now creating, and what they believe tomorrow will bring.

Today’s creator is none other than the transmedia pioneer Jordan Weisman. His most recent venture as CEO & Founder of Smith & Tinker has him once again ready to blast open new avenues of entertainment using a transmedia storytelling strategy for their launch product Nanovor. Jordan joins us to talk about his work and thoughts on the burgeoning craft of interactive narrative design for transmedia experiences.

Stephen Erin Dinehart: As a creator with multiple transmedia franchises under your belt, what does transmedia storytelling mean to you?

Jordan Weisman: First let me distinguish between “multi-media” and “transmedia”. A Multi-media franchise is a property that encompasses a variety of different established storytelling medium such as movies, books, TV shows, websites, etc in which each exploitation of the property is either an adaptation of the same story told in another medium or a new story set within the same “universe” but each exploitation is unto itself complete. The best, but certainly not the first, example of a multi-media property is Star Wars.

When I coined the term transmedia I intended it to be used to describe a single story being told across multiple medium and communication devices simultaneously in which each medium or device tells part of the story but that the entire story can only be experienced by combining all the story elements together. The goal of transmedia storytelling is to break down the walls that separate the audience from the characters. To have the characters live in the same world as the audience and to communicate with them via the same devices and medium that the real world does. The aim of transmedia is to provide the ultimate immersive story telling experience.

SED: That’s a compelling definition of the term, and breaking down
the fourth wall is a most noble effort. As the creator of the now
infamous The Beast for Spielberg’s Artificial Intelligence do you see Alternate Reality Games, as they’ve come to be called, as innately transmedial experiences?

JW: Yes, they are by design transmedia experiences. 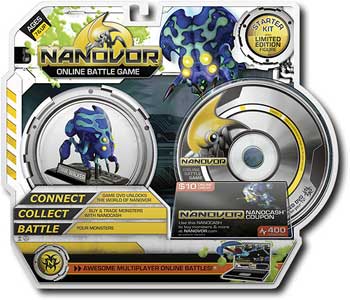 SED: When you created The Beast at Microsoft you had to
wrestle control for the marketing department and make them realize that
the media they created was in fact entry-points into the franchise.
Having tried similarly before myself with little to no success, I can’t
imagine that even as Creative Director at Microsoft Game Studios you
had to fight to get this idea executed, can you describe that battle?

JW:
I don’t think that ARG’s would exist without the curiosity of Steven
Spielberg and Kathleen Kennedy. I had pitched the idea to my bosses at
Microsoft and they said I couldn’t spend any money on it (because it
was crazy), and so rather than except defeat I pitched it to Steven and
Kathleen. They didn’t really understand or care how it was going to
help the marketing of the film and videogames, but they were intrigued
with the idea as a new way of telling stories so they got Warner
Brothers marketing to foot the bill, even though they weren’t allowed
to know what we were really doing because of the secrecy that Steven
wanted us to operate with. It was interesting to have WB send us all
their ads and for us to insert clues into them without them ever really
knowing what those clues lead to. It was an exceptional experience and
one I am not likely to encounter again.

SED: What tips do
you have for creators trying to get marketers to understand that
advertising and merchandising can also act to enrich and enliven a
transmedia franchise, and should be calculated in their rollout to do
so?

JW: ARG’s are an inherently limited entertainment
and marketing format because they demand so much from their audience.
Their greatest strength, the Hive Mind, is also their greatest
weakness. The giant collaborative storytelling experience of an ARG is
like Woodstock, in that people have to suspend their lives and dive in
head first because there is no way to really just put a toe in. The
transmedia method of telling a story can be extracted from the ARG
format and used on its own as a single person experience, and as such
is very versatile. These single person experiences require much less
investment from the audience and thus are much easier to get involved
with, which is why these techniques have been so widely adopted as
methods to extend stories and marketing campaigns. And because an
individual does not consume content like the Hive Mind does, they are
also much less expensive to create.

SED: How does this affect your rollout strategy for transmedia franchises at Smith & Tinker?

JW:
Each experience you have affects what you create next and that is the
case with S&T. Nanovor incorporates all the age appropriate
transmedia approaches that it can from viral videos, in fiction
websites, email addresses to send to, and phone numbers for the kids to
call. All of which is designed to immerse the kids deeper into Hanover
High and the world of Nanovor. 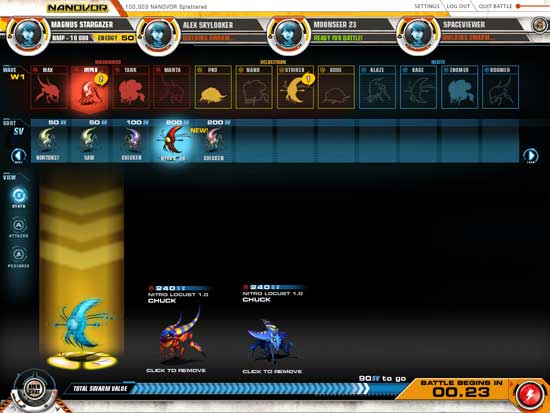 SED:
Your work for the most part is story-centric, remaining in the realm of
crafted story worlds; ones that invite the viewer/user/player (VUP) to
engage and participate. What drives you to tell interactive stories and
to experiment with different delivery techniques?

JW:
I have always striven to tell stories in different ways and via the
stories and often the games, to have the audience not only engage with
characters in a totally different way, but to engage with each other as
well. Humans are by nature a storytelling species, and I view the
universes I create as places for people to tell their own stories
within, so in some respect it has always been a giant social
storytelling experience.

SED: You refer to ‘The Hive Mind’
as a tool which allows the VUP to collectively assemble a narrative
from seemingly disparate parts; as you put it they act as
archaeologists reassembling a pot from a deconstructed narrative. Do
you seek to use this cognitive constructivism in your transmedia works
outside of ARGs?

JW: I think that the Hive Mind is a
unique component of ARGs. Non-ARG transmedia experiences are designed
for individuals and thus not really Hive Mind experiences.

SED: How does allowing your VUPs construct a story from your narratives better the user experience?

JW:
Different devices create different expectations. We expect a toaster to
render toast, and we expect that anything that runs on a chip
(computer, videogame, phone, etc) to be interactive to some degree
(even if it’s just allowing us to skip past commercials), Thus when we
come to a new form of storytelling on an “interactive” machine – it
better be interactive to some degree. Plus another facet of our
humanity is our endless fascination with ourselves, so we expect to see
ourselves reflected in our interactive entertainment. There is an old
story about when elevators where first invented and people got really
upset waiting for them. The elevator company had engineer after
engineer study the problem, but there is only so fast the cars could
move, so the company hired a psychologist who put up mirrors on every
floor near the elevators. Instantly the complaints went away because
everyone was too busy looking at themselves. Good interactive
entertainment holds up a mirror for us to see ourselves in. 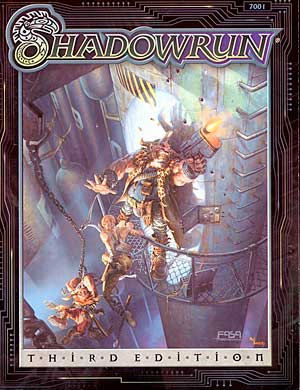 SED: Your first venture was starting your own RPG publisher FASA where in games like Shadowrun and MechWarrior
you succeeded in crafting immersive social entertainment. The games of
today are trying to embrace that social aspect your games facilitated,
how do you think games of today could learn from the innate sociability
of games past?

JW: Tabletop role-playing games had a
huge graphics advantage over today’s videogames, because they used the
“Infinite resolution renderer” (in other words your imagination). They
also provided the most seamless and powerful form of social
interaction, being in the same room together talking. Admittedly online
games come closer and closer to simulating the RPG experience, but they
can only simulate it, not duplicate it, because we humans of millions
of years of evolutional development focused on how to read the tiniest
little unintentional signs or phernoms,  from each other. So yes I am
sure that there is more we all could learn from “traditional” RPGs

SED: What potentials do you see in the future of transmedia storytelling?

JW:
All previous forms of linear narrative were by nature passive and
remote. The audience vicariously traveled with the protagonist on their
adventure, an adventure which takes place “away” from the audience.
Transmedia stories cross those boundaries, they shatter the fourth wall
that separates the audience from the actors, they blur the line between
where the real world ends and the story begins. In many ways transmedia
storytelling is a continuation of the process started by Orson Wells
when he realized that radio was not just a method of broadcasting stage
shows or concerts, but a totally different interaction with the
audience, because rather than the audience traveling to a venue, the
actors where invading the audiences homes. He realized that radio was a
much more intimate form of entertainment and so he created
entertainment designed to exploit that intimate connection, with The War of The Worlds
being the clearest and most famous example. I see transmedia
storytelling as a continuation of Wells desire to get closer and more
intimate to your audience.

SED: That’s dangerous stuff!
Jordan, many thanks for using your valuable time to tinker and talk
with the Narrative Design Exploratorium. I’ve learned, and I’m sure our
readers will say the same.

Jordan and his studio Smith & Tinker
are key players to watch as the media moguls of the world turn their
heads toward this exciting new form. Though his newest creation Nanovor
is clearly targeted at a tween male demographic it is something worthy
of study, and certainly deserves if nothing else a watchful eye. Though
I’ve been playing it eagerly. By creating a spectrum of media sources
to immerse their players in the Nanovor
universe they are developing new kind of story world, one which will
immerse the players in the ultimate form of decentralized authorship —
transmedial play using, as Jordan puts it, the “Infinite resolution renderer” and the drama that it surely induces for the player. For The Narrative Design Exploratorium, I’m Stephen Erin Dinehart, thanks for stopping by. Remember, it’s only through play great stories happen!

Listed below are links to blogs that reference this entry: Creators of Transmedia Stories™2: Jordan Weisman.

TrackBack URL for this entry: http://regionvuz.ru/cgi-sys/cgiwrap/dinehart/managed-mt/mt-tb.cgi/77

The Narrative Design Exploratorium by Stephen Erin Dinehart is licensed under a Creative Commons Attribution-Noncommercial-No Derivative Works 3.0 United States License.
Based on a work at http://regionvuz.ru

Creators of Transmedia Stories™1: Steve Danuser was the previous entry in this blog.